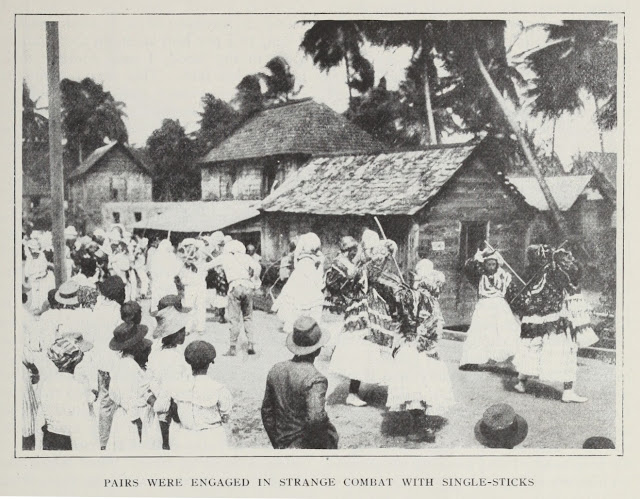 We’ve been working on several upcoming blog posts, but given that it’s been a while since we last posted —and that today is “Carnival Tuesday” (cancelled or not!)—here is a link to one of our favorite references on the subject: Frederic Fenger’s “Black Mardi Gras” article in Harper’s Magazine (1916).
https://archive.org/details/harpersnew134various/page/722/mode/2up
Note that the writing is completely pejorative and condescending — he was a white American guy sailing across the Lesser Antilles in his own small boat which he also chronicles. The article starts out with him loafing at the whaling station on Isle de Caille, when one of the whalers gets a light signal from Sauteurs to come over. What ensues is one of the earliest, most detailed descriptions available on carnival in Grenada.
As is clear to any Grenadian, the piece is entirely about what we generally call Shortknee Mas, but this version is similar to Carriacou's Shakespeare Mas (without the Julius Caesar stuff), given the protective gear and Kalinda fighting. It's way bloodier than anything we see today (thank goodness). And everyone gets in on the fight -- including a hilarious moment when a Barbadian policeman stops the fight, only to pick up a rock and fire it back towards the Chantimelle intruders!
But aside from the few tidbits in the article itself, the most interesting thing is really the photographs. For this reason, we are so pleased that Internet Archive has uploaded a high-res scan. Enjoy!
-JAH and JAM

Popular posts from this blog

Marking an ‘X’: Exploring the History of Grenada’s Surnames

August 26, 2020
Despite the widespread belief that most Grenadian surnames today are derived from plantation/slave owners, many former enslaved men actually used their first (and only) names to create their family names. This is the case for a plurality of both English and French-derived surnames today. That means your surname may contain a clue to the name of your last enslaved male ancestor. A smaller percentage of Grenadian surnames, both English and French, are derived from plantation owners, and this often indicates a blood connection. Maybe we can see these surnames as more a creation of the newly freed Grenadians to establish identity, rather than something imposed upon them, as was the case in other countries.   Malcolm X, the son of Grenadian Louise Langdon Norton Little (1895/6-1989), made famous the identity struggles of Black people in the diaspora when he replaced his family name of Little (or what has also been termed his “slave name”) with an ‘X’ to signify his lost or robbe
5 comments
Read more

An Aspirational Vision for Grenada’s Heritage

April 08, 2021
The rear courtyard of the National Museum is a hive of activity. In the rooms on the ground floor, small workshops turn out everything from pottery to covings, light fixtures to souvenirs. Each workshop employs a couple of people, creating castings, throwing clay, and carving stone and wood. Here on the table are a tray of ceramic lamp fittings, decorated with characteristic Saladoid curves and whorls copied from a reference library of archaeological reports. Once they have been fired, they will go to a hotel on Morne Rouge— a custom-designed order for refurbished rooms. In the workshop next door, two young artists put the finishing touches on a large mosaic panel. A government minister points out to a small group of foreign investors how the mosaic takes its inspiration from ancient Amerindian and contemporary African culture. One of the artists is a local teacher, and the plaque is destined to hang in his school in the north of the island. Upstairs, above the courtyard, the roo
Post a Comment
Read more

June 12, 2020
What do the ruins in this village tell us about Grenada's history?  The name “Marquis” was quite common in 17th century France (also used as a title for nobility), and several colonists of the La Grenade colony carried the name. For instance, “Fort Marquis” in Beausejour (yes, Beausejour) was named after its commander Lieutenant Le Marquis (later convicted for assisting a rebellion with one Major Le Fort). It was also the name given to an indigenous “Captain” on the eastern side of the island who presumably lived in the area of Marquis, St. Andrew today. 1 The remains of his village were mostly destroyed when the French town of Grand Marquis was built, but there are still some remnants left. Indeed, unbeknownst to most people, the pre-Columbian site at Grand Marquis is one of only a handful that date before ~AD 500 in Grenada. Figure 1: Some artifacts from the Grand Marquis site (GREN-A-2, Hanna 2019) The Earliest Human Presence In 1992 (and again in 1994), archaeologi
Post a Comment
Read more